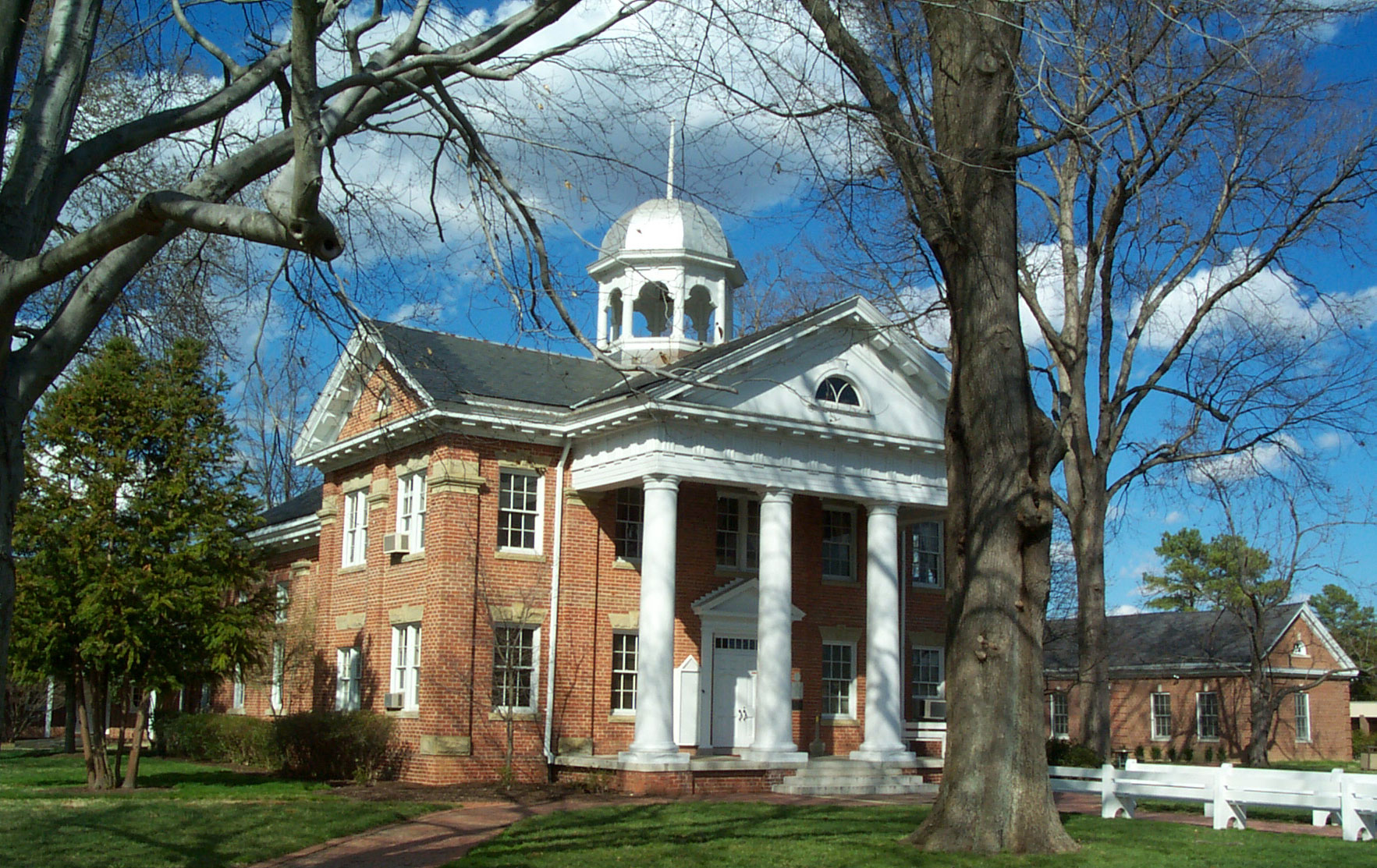 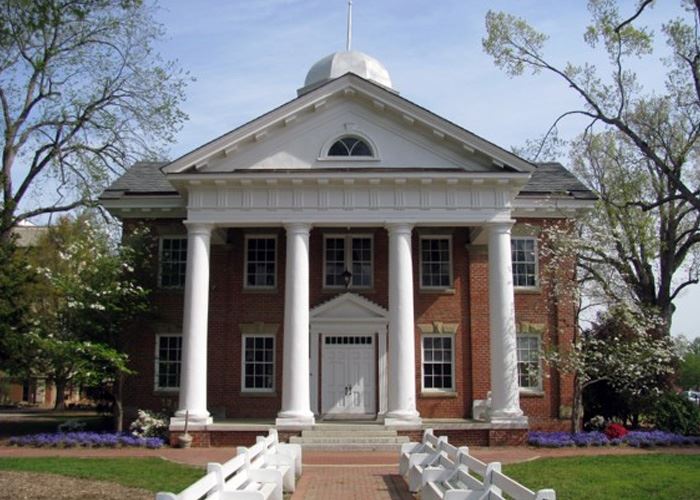 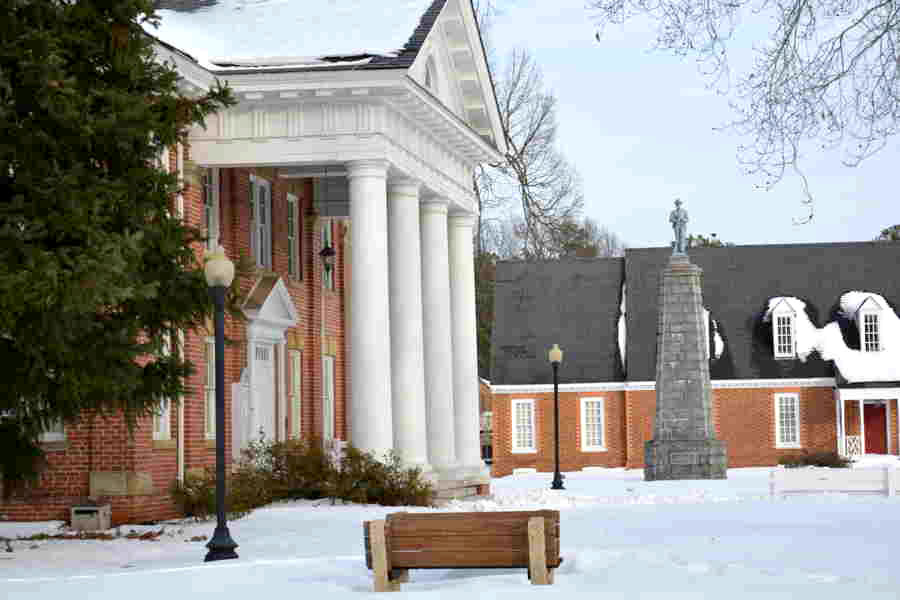 This courthouse is a point of pride in the community and is being preserved for future generations. It is a Chesterfield County Historic Landmark, a Virginia Historic Landmark and on the National Register of Historic Places.

The Historic 1917 Courthouse sits where the first 1749 colonial courthouse was once located. In 1916, plans were made to demolish the 1749 courthouse, and replace it with a larger and more modern building. This decision was met with opposition from some county residents and resulted in the first preservation struggle in the county.

Eventually, the Board of Supervisors voted to construct the new building. Eight short months later, the courthouse opened and the first case was heard. The Chesterfield County courts system still uses this courthouse today to hear cases.

The courthouse is an excellent example of Colonial Revival architecture with four prominent Roman Doric columns and portico, and crowned with an octagonal belfry. The interior woodwork in the courtroom is original. The two-story courtroom contains the original paneled judge’s bench and jury seats. Interior renovations were made in 2013 and the building was rededicated in 2014.

As part of the centennial celebration, the 1749 bell, which is the oldest historic artifact in Chesterfield County (and three years older than the Liberty Bell), was removed from the cupola of the 1917 courthouse. In April, it was cleaned, stabilized, the iron corrosion removed, and then it was coated to preserve it for many years to come. In October, it will be placed on permanent display in the Chesterfield County Museum. View the stabilization process video.

A replacement iron bell will be placed in the cupola to be rung for the Centennial event and at other designated times in the future.

The Masons were involved with the cornerstone-laying ceremony in 1917. Brother Benjamin Samuel Vincent was the Senior Warden of Midlothian Masonic Lodge No. 211 and led a delegation of Masons to assist Chesterfield County. His grandsons will be present at the October 26 event. David Immanuel Vincent Jr., and Albert Fredrick Vincent are fifth generation Midlothian Lodge members and the family has been members since 1866.

The first Camp Lee was selected as a state mobilization camp in 1917, just 18 days after a state of war with Germany was declared. It later became a division training camp. In June 1917, building began, with hundreds of Chesterfield County workers helping to construct it. Within sixty days, approximately 14,000 recruits were on the installation.

In June, an exhibit called “Mobilizing for War” opened in the Historic 1892 Jail and will be on display through November 2018. The exhibit contains 10 WWI posters that were used to mobilize the country to either join the Army or support the war effort as civilians. The posters are from the Ordnance Department, the Quartermaster Corps and the Young Women’s Christian Association (YWCA).

The museum is open Tuesday through Friday from 10 a.m. to 4 p.m. and on Saturday from 10 a.m. to 2 p.m. A $1 per person donation is suggested. For more information, call 804-768-7311 or visit the Chesterfield Historical Society of Virginia (CHSV) website.

In 2017, Chesterfield County celebrated the 100th anniversary of the Historic 1917 Courthouse. As part of the commemoration, the Chesterfield Historical Society of Virginia (CHSV) has written a booklet, “Two Centennials – A Commemorative History of the 1917 Courthouse and World War I in Chesterfield County, VA.” Historical information was researched and compiled by George “Buddy” Cranford, and edited by Lies van der Linden-Brusse, both volunteers with the CHSV.

Cranford, who retired from the U.S. Air Force in 1981 and currently serves as a board member of the historical society, undertook writing the book to tell the community about the history of the courthouse and about the men from Chesterfield County who were drafted into WWI. The courthouse was a significant location for the WWI draftees. They camped around it while they were waiting for transport to U.S. Army training camps.

Copies of the book are being sold for $10 at the Chesterfield Historical Society’s headquarters, located in the historic Trinity Church:
10111 Iron Bridge Road
Chesterfield, VA 23832

Copies may also be purchased online the Chesterfield Historical Society of Virginia website or by calling 804-796-7121. All proceeds from the sale of the booklet will go to the 2017 to 2018 Centennial Committee, which has been responsible for planning for the commemorative event, restoring the historic 1749 bell and acquiring the replacement bell, for the interpretative signage, the museum exhibit and more.

The Chesterfield Historical Society of Virginia is seeking funding from public and private sources to help finance the costs of preserving the historic 1749 bell, the replacement bell and other expenses for this commemoration.

If you are interested in contributing, email Megan Kitchen, CHSV executive manager, or call 804-796-7156.

Pennies for the Bell

We need your help to preserve Chesterfield County history!

Celebration of the Bell

In celebration of the Centennial of the 1917 Courthouse, the old courthouse bell, which dates from 1749 (three years older than the Liberty Bell), was restored and will be displayed at the county museum in October, and a replacement bell will be installed in the courthouse bell tower.

At every Chesterfield County Library branch, there will be a donation jar to collect change to help preserve this unique part of our county’s heritage. The jars will be in place until Tuesday, October 31. Any pennies (or nickels, dimes or quarters!) that you can spare would be greatly appreciated.